I’m an avid Runner’s World reader and have been for many years. Each month  I will pick one article from the magazine (suggestions welcome!) to discuss and we can kick around thoughts, opinions and reflections. We’ll stay one issue behind the most current so that non-subscriber’s can read along on the RW website.  It’ll be like a book club, except less Jane Austen and more sweat.  So grab a cup of Joe or tea (see, it is just like a book club!) and jump into the fray! 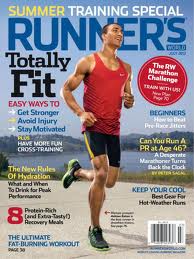 Yeah, I was totally fooled too. After seeing the title, I was mentally already halfway through a post about how running on ecstasy might interact with the natural runner’s high and what the starting line of a major marathon would be like with thousands of people running their hands over each others silky shorts and exclaiming how amazing they feel. Then I read the first paragraph and was all “Ohhhhh, they meant running on empty, as in no fuel. Riiiight.”

The article reports on a recent training technique whereby the participants purposely drain their tanks and keep running. The idea is that you will teach your body to burn more fat and “boost your body’s capacity for stored carbohydrates” , ie make you more efficient. This would hopefully translate to faster race times, since you would only employ this method while training and would run on a full glycogen tank while racing.

I admit to being a sucker for the latest running trends – I have embraced compression socks like nobody’s business and happily walk around in a pair of Five Fingers (have never made the transition to running in them, but love just hanging out in ’em!). I love coconut water and GUs and ShotBloks and I mix protein with my carbs now, rather than the straight carbs of my youth.  I’ve even been know to don a running skirt. But this one holds zero appeal for me.

First of all, eating is one of the greatest things about being a runner. Food literally never tastes as good to me as it does after a long run – that deep, aching hunger being satiated is such a primal pleasure. Second, the feeling of running while fueled properly is lovely – you effortlessly tick off the miles and your body happily complies, confident that you will keep it supplied with the good stuff. A bonking body is not a pretty sight and a cliff I like to aviod falling off.

One of the methods suggestedto get to a fasted state is to do a hard run in the morning followed by an afternoon run – this is tough enough on its own, but their suggestion of no carbs in between? Well, I think they sum it up best with “that’s a challenging and unpleasant approach”.

So why would I want to do that? I love how pleasant running is. I love the feel of a running skirt swishing behind me, the simple pleasure of  a chocolate mint GU at mile 10, the way my ponytail jauntily bounces along with me, the way my shadow seems to be playing a never ending game of tag with me… and I’d want to change that why? To *possibly* get faster?? I think I’ll stick to my Yasso 800s , thankyouverymuch.

Finally, I question the science behind this technique. Anyone else out there a RadioLab fan? There was a great episode a few years back that I would recommend to every endurance athlete out there called “The Limits of the Body”. In it they discuss the fact that your body gives you signals that it is close to depletion far sooner than when that is an actual issue. It’s like a built-in safety measure to prevent a catastrophe – and probably why scientists have also found that just swirling glucose around in your mouth and then spitting it out gives you a similar result to actually ingesting it (but don’t be stupid and not hydrate, people, this is just to prove a point!). Your taste receptors send a signal “all clear, boss, help is one the way!” and your body can handle a little more pressure without shutting down. Anyway, I wonder how “depleted” you actually are using the fasting technique, making me even less interested in trying it!

What are your thoughts on fueling and running?

Would you try this technique?

What trends are you a sucker for?